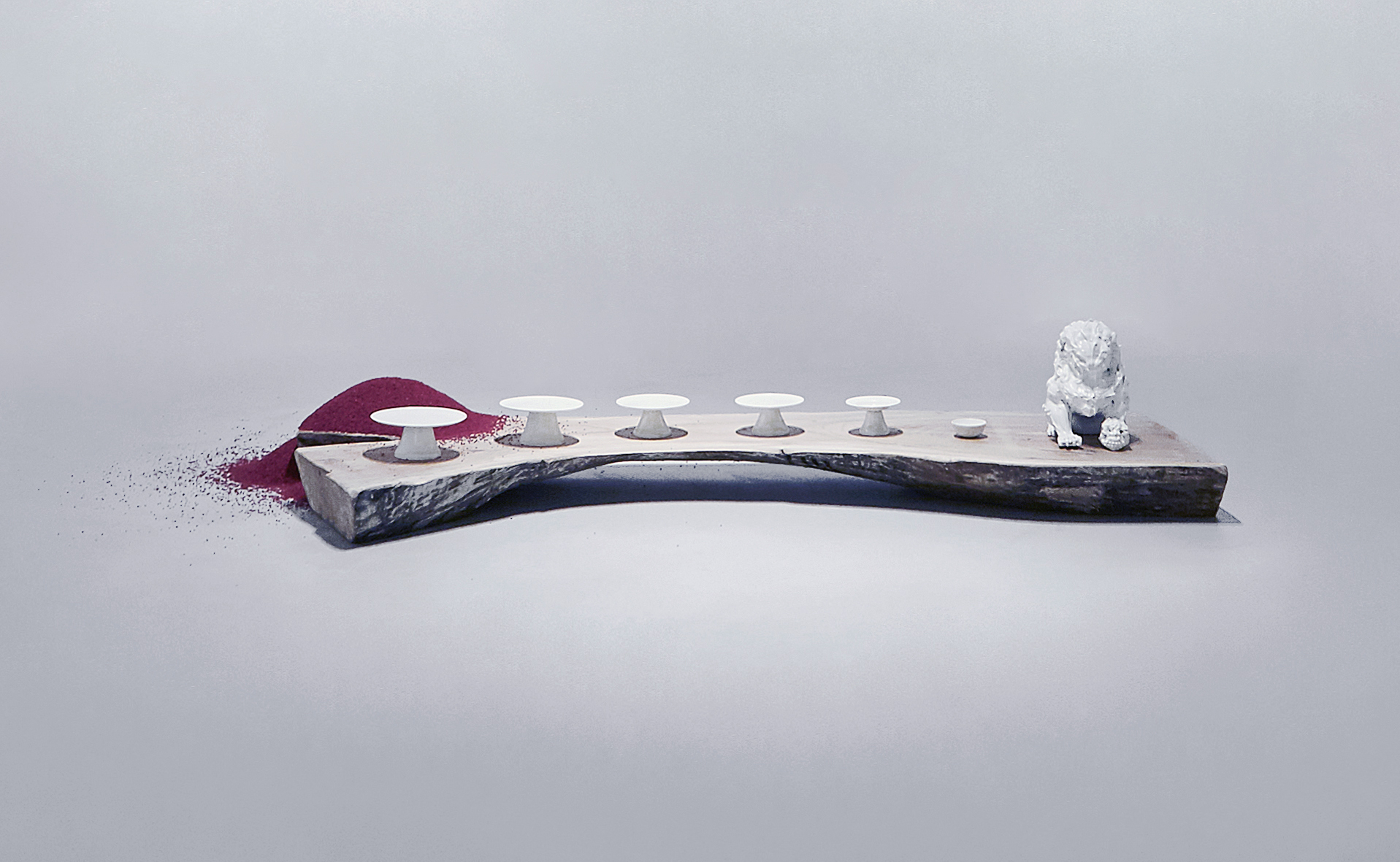 An offering displayed on a log—empty offering plates, set up with care, as counting for all the ancestors, yet with nothing to offer; an offering for a family without descendants, an extinguished genealogy. One corner of the log has been covered with rice dyed red, spilling onto the floor; on the other side, a bronze guardian-lion, mutilated by goops of plaster. Live Alone and Die Alone is a poignant installation which combines with grace the found and the created, the ready-made and the artist-made, and contemplates on the disregard and deterioration of tradition in a contemporary world sure that all its life lies ahead and none behind.

Although not a complementary piece, Funeral, a large four-panel silk screen and acrylic painting, functions as an extension of the installation. Funeral is one of the strongest pieces from Casper Kang’s recent exhibition at Sophis Gallery in Seoul. Combining personal and traditional symbolism, Kang creates a hybrid of silkscreen printing, architectural drawing and Minhwa painting. A fortress wall engulfed by a sea of black tar which turns into clear water as it pours into a cascade, a bride and a groom adorned in traditional headpiece or braided hair, the ever-present moon, a suspended bundle of blue-green clouds, a pink performance mask falling in the foreground, as engulfed by steam, stairs that lead to nowhere, are all elements of a complex and calculated image. Are we witnessing the portrayal of a dying dynasty, a dying history, a funeral, or is it all satire? Either way, we cannot ignore the great divide between the bride and the groom, between the pristine fortress wall and the black engulfing sea around. We cannot help but notice the tradition falling into smoke, or catching fire, the ancestors without descendants, the empty offering plates.

Cultural legacy, the continuity, reconstruction, and perhaps even a revival of tradition, are important for Casper Kang. Tapping into and expanding the “visual potential evolution of mother culture” is where, says Kang, much of his work stems from.

In a few of his two-dimensional works, Kang revisits the iconic Minhwa style. With his design and architecture background, Kang is able to push the style not only towards contemporaneity, but towards fine art. Minhwa, the most common of Korean folk decorative arts, is done in a straightforward and naïve style, and had the purpose of offering an optimistic outlook on life. Wishing for good luck or repelling evil spirits were the main themes for Minhwa artisans. They used symbolism, as well as humor and satire to express their feelings or their search for a miraculous order of the universe. Another purpose of Minhwa was to offer insight for present generations into the life of their ancestors. Casper Kang makes significant advances on all this. While he does not invest in research about Korean traditions, he is interested in projecting a long forgotten traditional style into a world where keeping tradition, preserving culture and national identity are not a priority. He is perhaps, consciously or not, using the purpose of Minhwa to educate the present generation, not about what was, but about what has been lost, what could be, or could have been.

Skeptical and at the same time loving toward his mother culture and its rapid change, Kang has moved in more recent works from engaging with the traditional Korean images, and away from the visually and descriptively symbolic, towards a focus on the deeper root of tradition, that being the belief system that structured society, culture and then tradition: morality and ethics, epigrams and proverbs, particular to Korean culture, a culture deeply rooted in Buddhism and Confucianism. His recent work comments on different “traditional Korean morals or idioms,” on “how they are being lost in modern Korean society or how they are possibly still relevant,” Kang explains. Visually, this recent body of work also moves away from the agglomerated two-dimensional, contemporary re-interpretations of Minhwa, to organic, minimalist installations. Using traditional staples of Korean life, such as rice or volcanic rock, Kang continues to create two-dimensional works while also expanding the potential of installation.

The two-dimensional works have become more sculptural, and the installations have become simpler, but still more expansive. And as the image simplifies, the essence of Kang’s work becomes clearer and more substantial. Transitioning from descriptive commentary on the realities of Korean identity to the distinctly poetic and pensive has proved to be a suitable process of maturation for Casper Kang, and the truthful, sensible beauty of his latest body of work proves it.